If you wondering, that how you can change the language of Facebook, then for such need we have here a brief explanation of language settings on various devices. Go through with this topic and you’ll find out the best need to the point.

Facebook is the online social media platform that provides users for creating their profile and sharing posts, photos, and even much more around the world. The best service here is that it comes with full privacy settings as well as in about 111 languages. Various people from wherever they are can use the app in the language which they prefer. It is in actual the most useful place for users in chatting with friends at any place.

We know that Facebook can change its text in more than 100 languages which is in it a great feature to have. Facebook in itself translates the posts that are in different languages into the English one. But what if you need the whole app in different languages of your need. For that, we will go through here in the explanation of the setting. We can easily change the language on Android, Desktop, iOS, and on any other device.

Changing language on Facebook by the use of an Android device

For changing language in Android devices, you can either go through the website of Facebook or either can go with the installed app of it.

If the app is not there installed, then visit the website of Facebook.com on the web browser.

Firstly, we have to log in to the account of Facebook at the website of Facebook.com. then click on the button which is located at the upward corner to the right side which is the menu button. It is represented there with three horizontal lines.

Scroll the given page and we will get the section of Help & Settings. Do the selection of the Language section from it.

Now from the given appeared list, select the language of your requirement. Alternatively, do the use of a search bar for performing the process quickly.

Then choose the language there of your need for the use in Facebook and further settings will be enabled there.

If you have the app of Facebook in your Android device, then also the language can be easily changed there.

The first thing to perform is clicking on the icon of the menu which is located at the upward right side on the given bar of the menu. It is represented as the three horizontal lines.

Do the screen scrolling to the downside and we will get the menu of Settings and Privacy. Select the option of Language there.

Then do the selection of the language from the given list that is available there. Alternatively, there is an option of Device Language which you can access in your phone settings. It will change the whole language of your device.

Changing Language on Facebook by the use of the iOS device

If you have an iPhone device, then you can easily change the language on Facebook on its app.

We have explained the steps of it in brief:-

Firstly, open the Facebook app and check there if you have already signed in or not. Do sign in if not done.

Then click on the icon of the menu which is located at the downside to the right corner. It appears as the three horizontal lines.

Now scroll the screen and then click on the Settings and Privacy option. It will open a menu there. Then do the selection of App Language there.

Changing Language on Facebook by the use of Desktop

For changing the language on the computer, we have two explanations for it. The one you can perform either on Facebook settings and the other one on the News Feed Page.

Firstly, we have to log in to the account of Facebook. We can easily perform it on the web browser of the computer that can be of Chrome, Firefox, Edge, and even on any out there. Visit the website of Facebook.com and go through with the credentials.

Now click on the arrow there which is facing to the downside on the menu bar of Facebook. It is located at the upward right side to the corner of the given screen which is just at the next to the shown question mark. 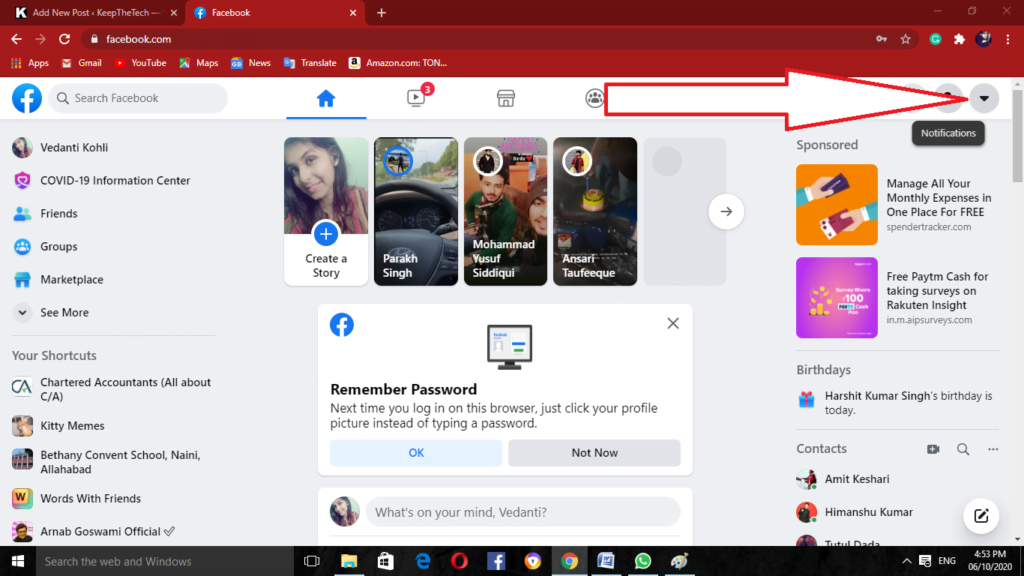 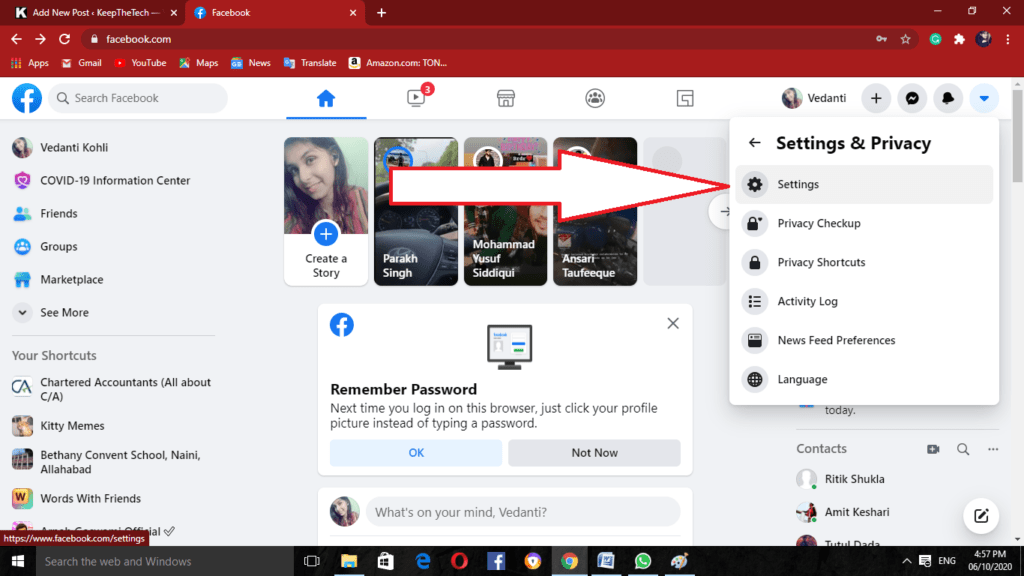 Now do the selection of the option of Language which is located on the left side of the given screen. 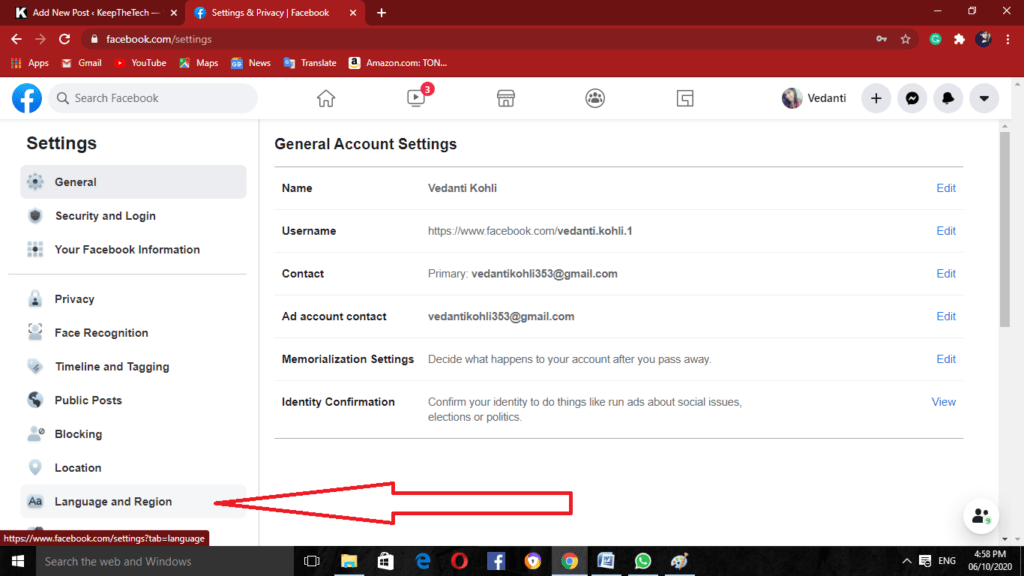 The page of Language Settings will appear there with various languages on it. Now, you can easily do the selection of the required language which you would like to have on the Facebook appearance.

Do the setting of the language in which all of the posts will get changed. Along with this, you also have to select the languages in which you don’t like to get the posts translated. It is the best feature to have on Facebook. For changing the language on Facebook, click on the Edit option which is located right out there.

Now the required language is to be selected from the given menu of the drop-down.

Then click on the Save Changes for confirming the selected language. 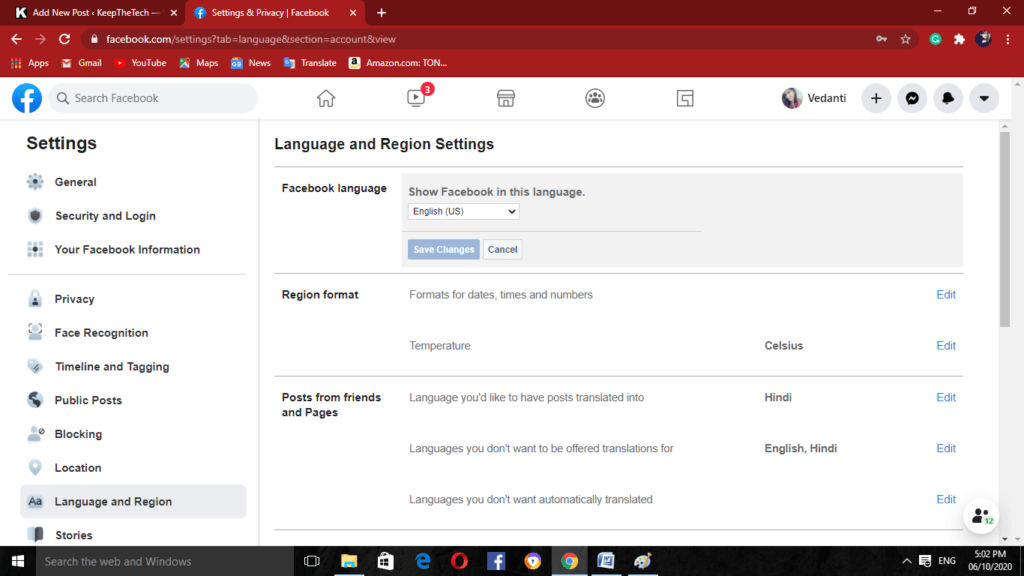 Changing the Language from the page of News Feed

From the appearing news feed, you can easily do the changing of the language that appears there in the text.

Visit the News Feed which is the page where all of the posts occur there.

Do the scrolling of the screen to the down till you get the box with the various languages which are located at the right of the given screen. Alternatively, you can click on the + which is located on the right side of the given box

We can do the selection of the available languages that are located on the box and then by clicking on the Change Language in the box there.

Now select the required language from the given list for saving of the changes.

We discussed here how you can change the language of Facebook in various devices. As every country has its own language therefore it becomes necessary to have it as per the requirement and knowledge of the person. Either you can change it from the web page of Facebook, from the settings, or by the news feed.