As we all know that there are various ways in which people are connecting to the internet. The most used way is through the router. Such routers are used for connecting a computer or various computers to the network. Most of the users directly attach it to the computer, but the others do the use of a wireless network card that doesn’t involve any of the wires or the cords. Many users do the selection of a Linksys Router for their own requirements.

As the Linksys is the primary form for the routers that are used by various ISPs.

What is Why to use Linksys Router?

Many users give the preference for using the router of Linksys as it gives the allowance to the various computers on a similar system. When a person does the use of a desktop computer and when many people do the use of a laptop, then they find a Linksys router as the most helpful one. Users can simply attach the desktop computer in the direct form to the system even without the use of a similar computer. For most users, it is the best choice. The hardware of the is simple to search and can be installed easily. There occurs no issue with the connection and is perfect for use. 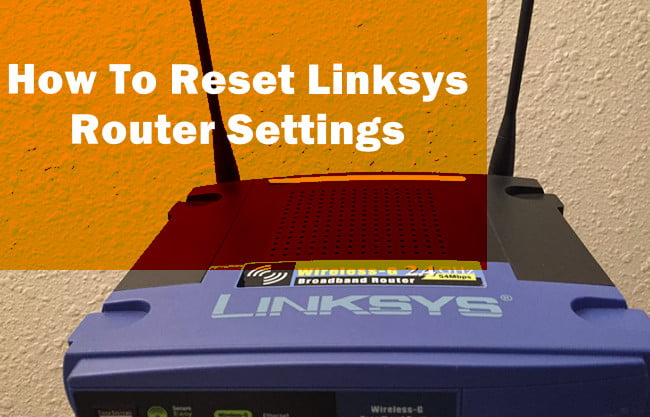 If the users are in the phase of facing any of the issues with the network connection through the router or any of the other problems with the router, then for that we have to perform the resetting of the wireless router.

Here we will go through with the information on how we can reset our Linksys Wireless Router.

We can perform it in two of the ways:-

Here we will go through with the process of it:-

The resetting of the web page setup can be performed by the restoration of factory defaults. It can be done by the inner interface of the web admin.

Firstly, we have to enter the required IP address of the router. Just type it in the address bar of the browser.

After that, we will be taken towards the webpage of the router interface. There we have to click on the tab of Administrative.

Then move towards the Factory Default. It is the sub-option available under the tab of administrative.

Now under the Factory Default, do the selection of the button of Restore factory defaults.

After performing these steps, we have to do the reconfiguration as per the Internet Service Providers.

If the users are not able for accessing the setup page of the web or don’t have the knowledge of the router password, then they can go on with the factory default settings.

Here we have the explanation of the steps of it:-

Firstly, it is to be viewed that the Linksys wireless router has a hole or pin on the backward side of it.

We have to perform it by inserting a little paper or a tiny pin in the given hole and have to keep holding it for about 15 seconds.

At this time, we will get the light flash of the wireless router which will blink and then start.

As when it will get rebooted, the router will be there to the default factory settings of it.

By pressing on the button of rest we have to unplug or again plug the power adapter of the router.

Now reset the router by the use of web paged setup.

By resetting the Linksys Router password, we can give a reset to the router. It can also be a situation where it may have been in the reach of unauthorized users. The password of uncompromised one can lead towards exposing the user’s network to the various risks of security.

It may also include the various malware that is there in the installation by the hacker eve with our knowledge of the user. It requires about a few minutes in resetting the password of the Linksys router.

Here we have the explanation of the steps for it:-

Firstly press the button of reset which is located on the Linksys router and then hold it for about 20 seconds. You will find the button as per the device model you are having. Usually, it is in the location of a pinhole of small one on the back or sidewards of the given unit.

Do the inserting of the paper clip which should be properly straightened in the given hole and then you will get the feel of resistance. The reset of harder one will appear there and the router is now in the restoration of the factory defaults.

Perform the logging in along with the reconfiguration of the router asper the hard reset. Do the connecting of the PC to the Ethernet port on the given router. Now open the browser and perform the navigation towards the http://192.168.1.1/.

There will appear a popup box that will take you to the login screen. On the older ones of Linksys router, keep the field blank of a user name and then type their admin for the password. If you are on the routers of a new one, then the credentials in default forms are set to the administrator types.

Visit the tab of Management after logging in it. Now keep a nee administrator password there. For the proper security, you have to do the selection of the password which includes the letters as well as the numbers in random forms. Such passwords are even more secure and it becomes impossible in guessing of it.

Do the enabling of the WAP or the WEP security by which anyone else will not be able to come and go towards your wireless network.