As the Network Coverage is improving in a better form though many people around worldwide are not even getting the proper signals in their home. There are various gaps of the network, in various rural areas which shows the conditions in the worst form. For such a thing WiFi calling is the solution.

What is WiFi calling?

The WiFi calling gives the allowance for the use of connection of the Wi-Fi for making or receiving the calls when the network signal gets weak. If you are on the home and there is the lower spot of the bedroom, or the smartphone bar drop down to the bathroom, then the phone gets switched to the home network in an automatic form and will use for making and receiving of the calls.

The best thing about WiFi calling is that it works seamlessly. As if you will assume that the carrier gives the support, if you have not activated the proper settings of the phone, and you have connected to the network of Wi-Fi then it will kick automatically. All of the calls that you make and the messages that you send by the WiFi calling will occur there in the normal manner.

The icon in the notification bar may change to the phone receiver of small one with the VoLTE or Wi-Fi Icon which is above of it, or maybe apart from that, and you will not be able to any of the difference between the regular and the Wi-Fi calls by the mobile network.

Keep in mind that the WiFi calling will be capable of handing over the network if the range is out of the WiFi router, then there is a change of pausing or dropping of the call. It depends on the device, carrier, and the network.

Here it is explained how you can turn off the WiFi calling. We have taken here Android phone example.

Here the steps to follow to disable or enable WiFi calling on android devices such as smartphones or tablets.

Open the Settings in your Android phone.

Then Tap on the Network & Internet or Mobile Network button.

Now, Tap on Mobile Data and Scroll down the screen until you see the Wi-Fi Calling option. Tap on it and select Disable/ Enable option. Which you prefer

If you wanted to turn off WiFi Calling then select “Disabled” and to enable it to select “Enabled”. 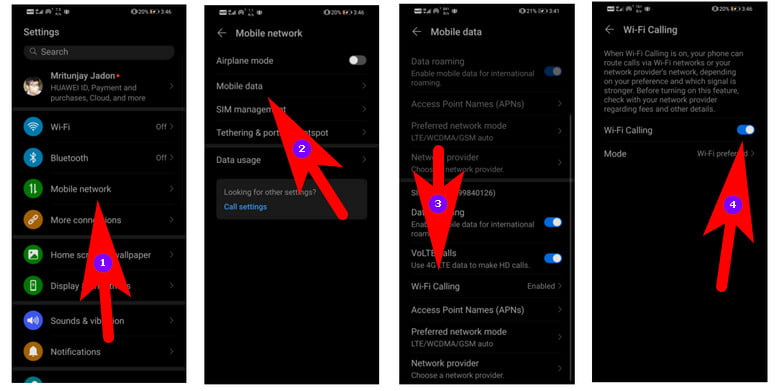 You now have to turn off the standard data of the mobile phone. Perform this by Turning the Android phone to Airplane Mode. The Airplane Mode will do the stoppage of the device from relying on the usage of cellular data. The incoming as well as the outgoing calls will be performed in an automatic form through the Wi-Fi.

Turn off WiFi Calling on iPhone or iPad

If you own an iOS device such as iPhone or iPad and want to only receive calls using your cellular network. Then you can easily disable wireless calling on your iOS devices using below given steps. 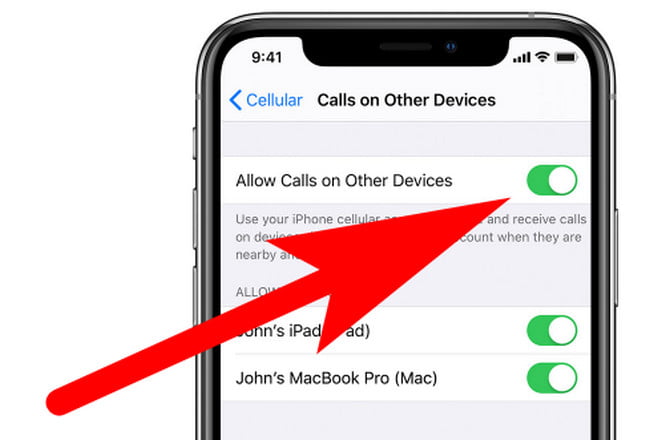 If you only want to remove any particular device from which you don’t want to get WiFi calls then here the steps for the process.

WiFi calling gives the allowance for the speaking in the remote locations. You don’t have to be in actual near the tower of the cellphone. The only requirement is the internet connection. Though the same as the T-mobile, AT&T, and Verizon gives the mobile data, the more you are near the towers of them.

WiFi has the connection of weaker ones in most of the times than the cellular data. The quality of voice can be taken off if most of the people are in use of the WiFi hotspot at the same moment. It happens when the places of a crowd like the stadiums or the centers of shopping are there.

The major drawback of the WiFi calling is that it can lead to various disruptions from the network through the various issues of VoIP. Such a problem can cause the echoes or can delay the network connection.

Video calls that are made by the use of Wi-Fi can suffer the most. For such a reason, it may not be the best option for the employees of remote that are stuck in various places with the overcrowded connection of Wi-Fi. They have the proper strong connection of cellular. It is because the coverage of cellular areas is much reliable in urban areas.

If it was not that enough, then it can cause the WiFi calls to extend the battery life. The device which searches in the continuous form of the cellular network for connection of the drainage of the battery.

Users can easily make Wi-Fi calls by the use of the Nextiva VoIP app. You can go for the App Store and can search there Nextiva for downloading the app in the device. You can start there by uploading the contacts to the database. Perform this by importing the contacts from the device by adding it in the manual form.

The VoIP number will be the same that one you have created when you have the subscription of Nextiva. Similar things will apply by the use of the International numbers.

As per the business communication report, Wi-Fi calling feature is innovating in the new era. Such a feature will come in its great development to the time of the working in the remote form. Though the Wi-Fi calling doesn’t have the extra charge as it is taken from the monthly plan of voice.

Here we discussed the Wi-Fi calling of how you can turn it off. Along with this, we discussed various other headings on it. Give a read to this topic and tell us to comment on it. Also, read our more topics.