Ubuntu 21.10 “Impish Indri” is the new release in the ubuntu non-LTS lineup. This version brings new features and improvements that will be discussed in this post. It is the last and a major interim release before Ubuntu 22.04 LTS which will be released in 2022. The last interim release also provides a glimpse of the upcoming LTS version of Ubuntu.

If don’t know what the last interim release means then here is how it goes. Ubuntu releases long-term support and a sort-term support version. So a new version is released every sixth month. The fourth release is LTS and gets support for years to come.

The Ubuntu version in between these LTS releases is supported for sort time two years. Ubuntu 21.10 is the last short-term support release. It might have clues of how the next major Ubuntu version might look like. So let us find out what improvements and features comes with this release of Ubuntu.

Ubuntu is a major distribution of Linux. It is an open-source OS and has shown continuous improvement over time with every release. Ubuntu 21.10 is no exception. This release also shows some new useful features. Security, which is a major plus point of Ubuntu is also improved. So here are some highlights which you will see in this Ubuntu release.

Linux kernel is the Building block of all Linux distros. Ubuntu also uses the same Linux kernel. The new version of Ubuntu comes with the latest Linux kernel 5.13. Its focus this time is on security. It also has improvements for overall system performance and hardware support. Amazon luna controller is supported by default.

Linux kernel’s main issue is its vulnerability to memory errors. To solve this issue, KFENCE is introduced in Linux kernel 5.13. KFENCE or kernel Electric Fence is a new run-time memory error detector. It solves most common memory errors with a sampling approach rather than overseeing the whole operation. This feature is still disabled in Ubuntu 21.10 due to some instability issues but will be enabled as soon as resolved.

Mandatory Access control is also applied so applications can only use required resources. The most common security vulnerability comes from the application, no matter how trusted the sources are. MAC will help to restrict unwanted resource usage to prevent a security breach.

BPF is a major player when it comes to virtual machines. It is now commonly used for performance information gathering. The downside to this feature is that unprivileged users could also load the BFP program into the kernel to access your PC. Therefore in Ubuntu 21.10, only privileged users can load BFP to the kernel by default. The administrator can also provide this privilege to other users.

GNOME is the default desktop environment in Ubuntu. GNOME has made some changes to its looks over the years. This version has done a really good job at it. Its new appearance might give OSX feel but with a Linux touch.

It might look different but the core remains the same for a seamless workflow. All the corners are now rounded which is a nice touch. Overall, GNOME 40 is a key update in its lineup and feels modern.

There is also an update to animations system-wide. The workplace is now horizontal and comes with new gestures for the touchpad. These new gestures can also be used from the keyboard with unique key combinations.

There are also other improvements to the apps like maps, weather, and much more. All these Appearance changes give a new feel to Ubuntu 21.10. 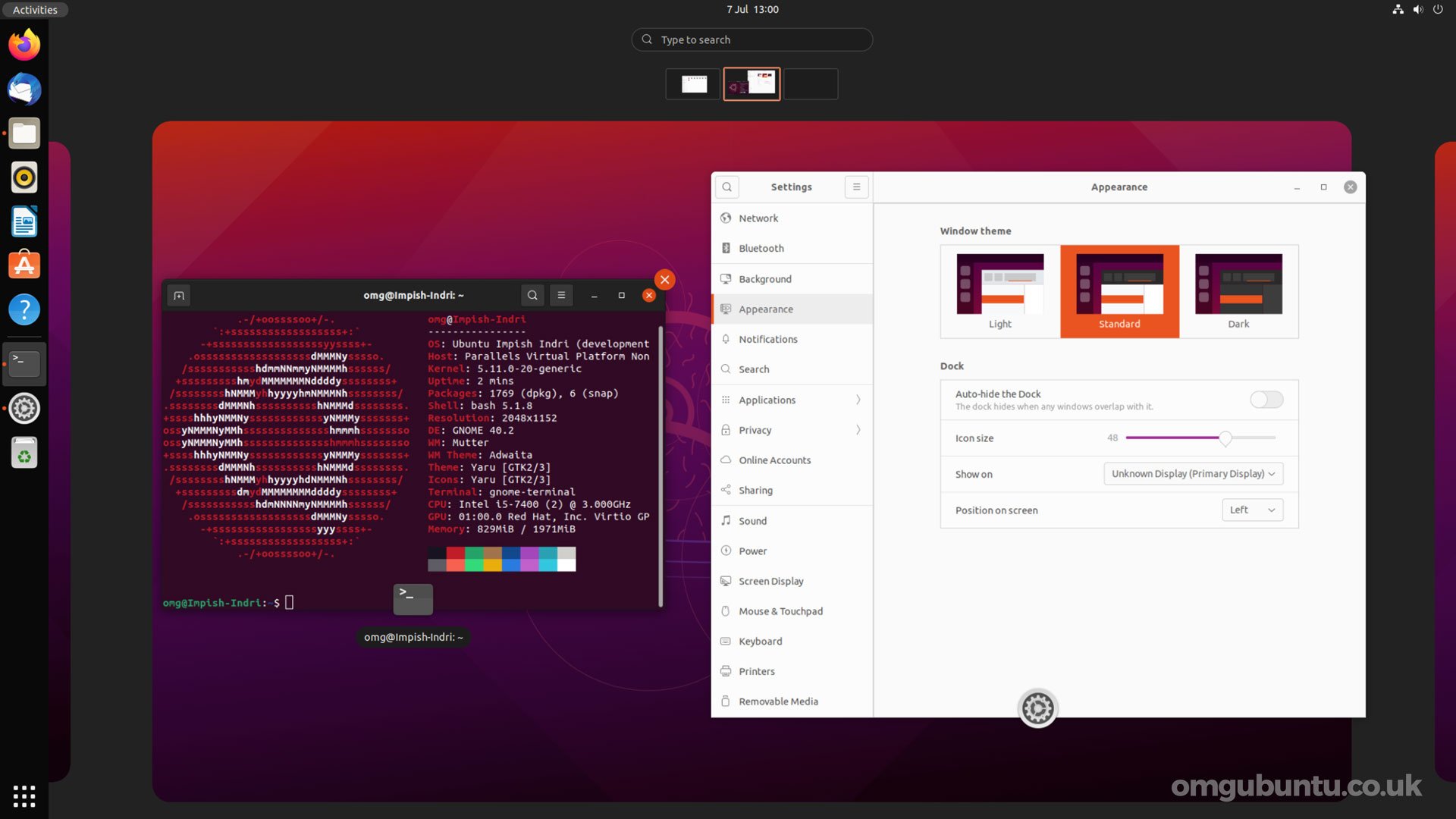 Ubuntu changed the display server to Xorg starting from Ubuntu 17.10. It seems to fail now. So Ubuntu 21.10 comes with Wayland Server. Wayland comes with better support for all kinds of displays with high DPI and in the case of multi-display setup.

The Ubuntu installer previously has always been user-friendly. Ubuntu 21.10 take it up a notch. It is now more newbie-friendly.

It now comes with the latest version of GCC. All the new features and security measures used GCC 10 are improved to another level.

Firefox browser is now available as snap as default which will be helpful in faster updates.

Zstd will now be used to compress and decompress .deb packages for faster installations

Yaru theme is used as default which is a nice change after a long time in the theme department.

LibreOffice is also upgraded as well as Latest version of PHP is now used as default.

In the end, it all comes down to personal preferences. This post gives you insights into the features which you can consider for an upgrade.

Overall, GNOME 40 is the main reason if you want to upgrade from Ubuntu 21.04. If you are on an older version, then there is a lot to consider. If LTS user, then you might want to check out this release. It is a major interim release and might give you a grasp of the upcoming LTS release.