Tumblr is a well known social networking platform and it has been available since 2007. It’s all about providing content to the users but as you know this platform updated its content terms and after that lots of blogs and posts have no longer a safe mode button.  Because of these actions, thousands of blog post has been deleted from Tumblr that contain contents that affect the terms and policy of Tumblr.

However, not all the contents have been deleted and if you’re an adult and want to use Tumblr with complete experience then in this case you can easily turn off safe mode on Tumblr.

What is Tumblr Safe Mode

Safe Mode is a feature that allows users to take control of the things that are accessible. As we know millions of Tumblr users generate content on the daily basics so these content don’t get behind the website such as Tumblr added a feature called Safe Mode.

Just like Reddit, If you used Reddit then you must know on Reddit you can easily allow or disallow NFSW contents without having a hassle. Same goes for the Tumblr, now you can allow or ban content in Tumblr using the Safe Mode.

If you stumbled upon someone blog on Tumblr and if the blog has sensitive posts or contents you will get a notification before a full web page is accessible. According to Tumblr, you cannot turn it off but there are ways to get the content accessible.

Note: If you’re under 18, then you should not disable safe mode on Tumblr

In case, if you’re want to know how you can turn off safe mode Tumblr then follow below-given steps by step instructions.

Now you’ve will be redirected to the My Tumblr Dashboard. After this, when you try to access posts or links which is unsafe. You will see an warning message in a popup window.

After that click on the Go to My Dashboard button. After this, the problematic blog will arrive on the right side of the browser window.

Now, Click on the  “View this Tumblr” button. This action will open the post or the link of the blog in a designated space.

Launch the Tumblr App on your phone (iOS or Android) and login to your Tumblr Account.

Now, Tap on the content that wants to access and if you get a message such as desktop version “This Tumblr May Contain Sensitive Media”.

Tap on the “View this Tumblr” button to access the post or link of the blog without having a hassle. 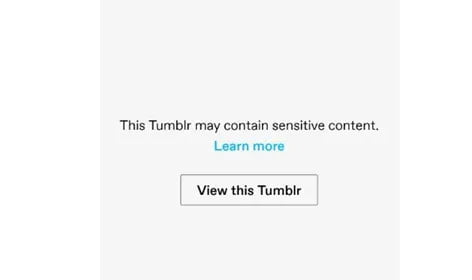 Hopefully, you link this article information useful to know how you can turn off safe mode Tumblr. For more interesting articles keep reading.