What is Gog galaxy 2.0? If you’re wondering the same question then don’t worry we guide you all about the Gog galaxy game launcher and how you can use it to access multiple games on your PC without having a hassle. In this article, we’re going to give a complete review of the Gog galaxy.

What is Gog Galaxy?

The Gog Galaxy is a game launcher that allows you to access multiple games through the same software. Well, as PC gamers, we all know how many different libraries to keep track of and many different launchers to install for gaming.

Yeah, EA games move to the Stream which is good news but what about the other game developers such as Origin, Uplay, Steam and more. As a gamer will keep in touch on all these platforms and it hard to keep track of all of them when we need them to access.

So, if you wanted a single platform that unites all these gaming platforms in one place. Yes here comes the Gog Galaxy 2.0 ultimate gaming launcher for PC.

The Gog Galaxy 2.0 is an ultimate game launcher that puts together all your most likely games in one place.

In other words, the game launcher assembles a single library for all the games from Stream, Origins, Uplay, Epic Store along with games from GOG.com. The several integrations in the GoG galaxy launcher work great up to 20 gaming platforms.

GoG Galaxy 2.0 is an open-source software its free to download. It’s a beta version and developers are still working on the software to make it more accessible for future games.

How to integrate Stream, Uplay, Origin to GoG Galaxy.

Firstly launch the GoG Galaxy 2.0 launcher on your PC through Start Menu or Desktop Icon. After this login into your GoG Account. 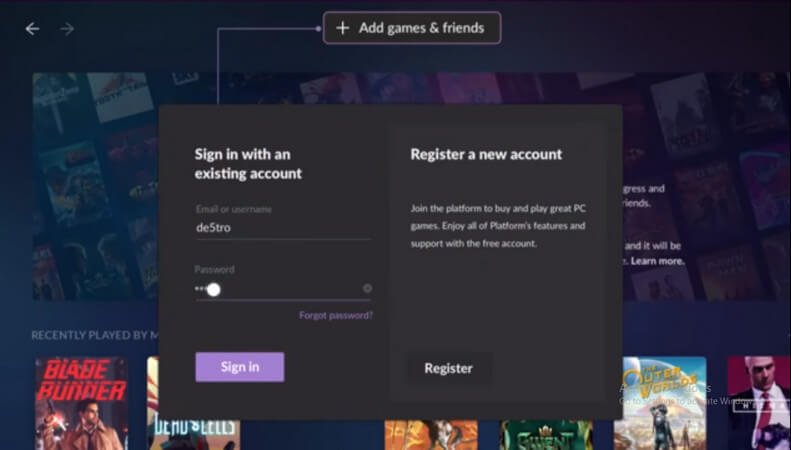 At top of the GoG launcher, you’ll see the “Plus icon” tap on it. After that select the “Connect Platforms” now you can access all the platform 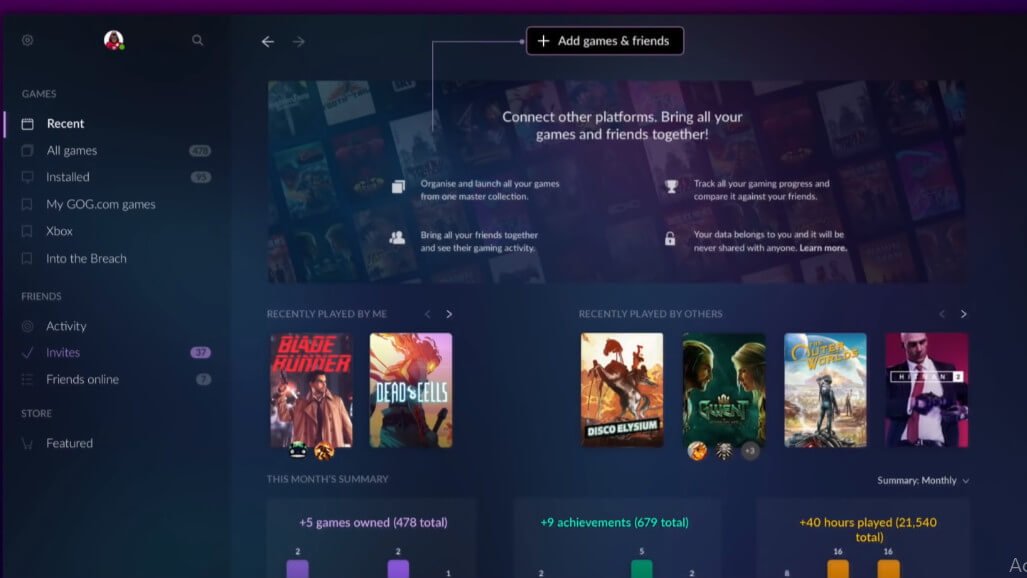 You’ll need to login individually to add them in just one click you can connect to the stream, Uplay and Origins etc.

Once, you’ve connected the gaming platforms you’ll able to see options to get more games on the right hand. You can add options for that by using the filter options for instance you get your all Streams games in one place.

You can also install games into your PC using this GOG Galaxy. By clicking on the install button the process will be the same. To get the information about the games through Gog Galaxy 2.0. Just select the game and get the usual details. Information such as your achievements, time spent playing the game and much more.

Do You Still Need To Install Other Launcher

If you’ve installed the Gog Galaxy 2.0 on your computer then you think if you don’t need to install another gaming launcher from then you might not be correct. Unfortunately, that not the case, you need to install them for various purposes such as Cloud storage, game update and more.

This does not mean you needed to launch each game individually when you want to play games through Gog Galaxy 2.0. You can perform multiple tasks through one platform Gog Galaxy 2.0.

After adding the games into the library of the Gog Galaxy game launcher it gets a bit massive. When you’re on the “Owned Games” section in the library. You’ll get a filtering option at the top of the screen of the launcher. Click on it and you can easily filter the games that you wanted to in one list.

To filter the games in the library you need to click to show indie games, indie games or shooters. Moreover, you can also filter games through the platform, operating system or status.

You can also use the Galaxy 2.0 search bar to find the games but you can also go into specific games and add your custom tags to each game. And you can use these tags to search games anytime you want.

Recently the GOG release the statement on Twitter “GOG Galaxy 2.0 is now enhanced with EpicGames official integration”. The Gog Galaxy has support for multiple platforms however all of them are not official. So the company has officially started supporting Xbox Live integration. And now EpicGames supports too.

These are some commonly asked questions regarding GOG Galaxy 2.0.

A: GoG is a secure and well-known website among gamers. The reputation of the gaming launcher GoG Galaxy 2.0 is quite good in the gaming community.

A: The Stream platform is more inclusive compare to The GOG Galaxy. When it comes to various features and options you get on Stream. Including managing your massive game library of PC, Purchase games from other stores such as Amazon and activate them on Strem without hassle.

Q: What does GOG stand for?

A: The GOG is a short form of “Good Old Games”. More likely, the GOG.com is an official platform for video games and film distribution such as Stream.

Q: Does Gog give free games?

A: Yes, you get some free games on GOG Galaxy 2.0 gaming launcher for PC.